On January 15th 2017, INN is celebrating her second birthday and we’re in the mood to party! That means it’s time to giveaway another ship. When we started thinking about our birthday giveaway we decided there will only be one rule: It’s gotta be big. That’s why our first prize is a brand-new, Banu Merchantman 2016 Anniversary Edition!

We’re also invading The Base for 2017’s very first Friday Night Show where we will hype first prize and giveaway 2nd and 3rd prize live. Rumor has it there may be some other prizes as well.

Then, on Sunday the 15th, we’re joining Gyun Nah on The BASEment to hang out, talk about INN, and give away the Banu Merchantman! You don’t want to miss this!

Described as more than just a ship, it’s a home and a way of life. If you want to become a trader and merchant in Star Citizen’s persistent universe than this is the ship for you. The Merchantman is a traveling market, capable of landing or docking to invite the locals on board to view the products and negotiate.

The ship design, perfected by generations of Banu development, is intended to offer a combination of high speed and durability. While the Banu is less configurable than a Caterpillar or a Starfarer, there’s still plenty of room to take the ship in different directions. From black market trade platform to deadly q-ship, it’s a force to be reckoned with!

The Anniversary Banu Merchantman comes with 48 months of insurance, and a VFG Industrial Hangar! 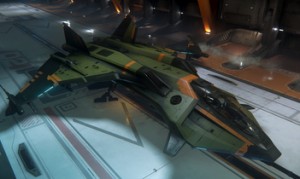 This special edition Aegis Gladius was given away exclusively during the 2016 Anniversary sale. This Gladius comes equipped with a specialized dogfighting focused loadout and a custom special edition paint job.

The Gladius Valiant is available to fly in Arena Commander and the PU Now!

Third prize is your choice of either an Aurora MR or Mustang Alpha Starter kit. In addition to your very own starship, Star Citizen starter packages include:

An Aurora MR Starter kit. In addition to your very own starship, Star Citizen starter packages include:

The INN Anniversary Giveaway will be random drawing from our list of email subscribers with a twist. To be eligible you must complete the following tasks:

Also, you can also increase your odds of winning the first prize by entering the drawing up to one additional time per day up until January 15th by sending out ANY tweet which mentions @INN_Authentic or @WolfLarsenSC AND the URL to this page with that image!

That’s all there is to it! The winners of the Second and Third prizes will be pulled on Friday December 13th live during #TFNS on The Base. First prize will be drawn on Sunday, January 15th and announced on Twitter.

Remember: if you’ve already signed up for an INN Ship Give Away Drawing in December, you are still eligible for all other drawings so long as you don’t withdraw AND fulfill the additional eligibility requirements for this drawing.

ALL THE IMPORTANT THINGS: